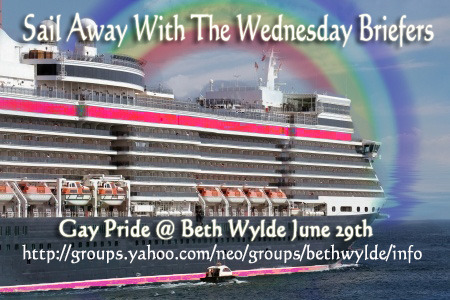 Dale Patterson stood on the deck of the Queen Bee as they set out for Hawaii. What am I doing here? I stand out like a turd in a punchbowl. Looking down at his long-sleeve Western shirt, skintight Wranglers, and boots, he realized he really did stand out. Most of the other men on board, at least the ones he could see, were dressed in polo shirts and khaki shorts. What seemed to draw the most attention were his boots. They were tinted the color of west Texas clay but the color hadn’t faded over the years. Ranch life had been ground into the boots each day he worked his 640-acre ranch.

Dale explored the ship, and then went back and got settled into his cabin. Pulling out the calendar of events, he saw the bachelor auction listed for that afternoon and chuckled to himself. Judging beef and its value was something he knew quite well.

“If I don’t get out and do stuff, I’ll spend two weeks holed up in this cabin. It’ll be weird enough being out to sea.” Flipping back through the events calendar again, his gaze landed on the details of the Bachelor Auction. Seeing it was a benefit for the Trevor Project, he didn’t give it a second thought as he filled out the card to be a part of the auction.

He checked his watch. There was just enough time for a light lunch, and then he’d start getting ready for the auction. He set out his boots, bolo, and his favorite cowboy hat, and then set off to get lunch. As he walked back through the main area, he saw a box for Bachelor Auction nominations and pushed his card into it.

After that, he made his way back to his cabin and got dressed in his finest clothes: meticulously polished black Double H boots, tight boot-cut Wranglers, a proper button-up shirt, and his bolo tie. As he looked at himself in the full-length mirror, he realized he was dressed for either a funeral or a wedding. He paused for a moment, his serious expression dropping as a wistful thought—of finding a husband—crossed his mind. Just as quickly, it passed, and his face returned to its normal stern countenance.

As he made his way to the ballroom for the auction, he could hear the sound of his boots echoing in the corridor, which made him smile. He assumed he was the only person who would have suggested him for the auction, so he figured he’d be up, passed on, and then he could sit and watch the rest of the auction.

As he walked in, a short petite blonde woman from the crew spotted him and made a beeline for where he stood.

“Hello! Welcome to the Charity Bachelor Auction to benefit the Trevor Foundation. You must be Dale Patterson,” she said, as charmingly as anyone he’d ever met.

“Mr. Patterson, would you walk with me?” She took his arm and nudged him along. He followed, and soon they were in a more deserted part of the ballroom.

“Mr. Patterson, my name is Lisa Taylor. I’m the cruise director and the emcee for the auction. We had quite a number of gentlemen suggested for the bachelor auction, but your name, or at least your description, came up over and over. With your permission, we’d like to have you toward the end. By then, all the people who suggested you should be worked up, and hopefully will raise more funds”

Dale smiled and tipped his hat to her. “Certainly ma’am. I didn’t expect anyone else to put me in, but I wanted to help such a worthy charity.”

Lisa flashed a bright white smile at him. “Mr. Patterson, you’ll certainly do that. I can guarantee it.”

She blushed and directed him to the orchestra pit, where the bachelors would be during the auction. As he stepped into the pit area, one of the ship’s staff directed him behind the curtain. Soon, he had a number fastened to him and someone had gotten him a bottle of water, just like he was at a rodeo.

As the auction started, the first few bachelors were getting about 300-500 dollars for their dinner dates, and Dale smiled, thinking about the money raised. Sitting back, he lost track of time until he heard his name called and realized he was the only one left. He set down his water, made sure he was neat and tidy, and walked out from behind the curtain. Gasps, then catcalls, went up from the crowd.

“Our final bachelor is a true man’s man. Dale Patterson from the Texas Hill Country. Dale, tell us about yourself.”

He explained he was a proud born and raised Texan, with a ranch that had been in his family for over one hundred fifty years.

Lisa smiled at him. “How is it such a ruggedly handsome man like yourself hasn’t settled down?” She ended the sentence with a slight blush in her cheeks.

He tipped his hat and looked down briefly. “Aw shucks, Ms. Taylor, I don’t spend much time in the city, and it’s hard to find a man who can handle bein’ on a ranch.”

“Let’s open the bidding at one thousand dollars,” Lisa said as Dale’s mouth dropped open for just a second. He quickly regained his composure. He couldn’t see the bidders due to the lights, but in only five minutes, someone had bid $12,000 for dinner with him.

“Now, let’s see who our mystery bidder is…”.

This site uses Akismet to reduce spam. Learn how your comment data is processed.